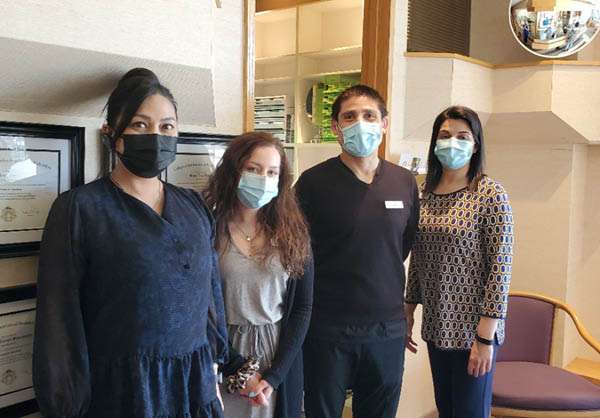 FYidoctors Broadway has a unique story. Originally established as a practice in 1912 as Armstrong & Armstrong, it boasts a rich history in the community. Located in South Granville, Vancouver, it is a local staple and thrives in its community among elegant homes, stylish shops, and international restaurants.

The staff at Broadway are genuine friends, and strongly believe that a big part of making the clinic an incredible place to visit is being able to connect to each other and share their passion of great eye care with their patients. Much of the team has been working together for over a decade, so the connection the ODs have with each other - and their community - is a special one. In fact, patients of this location often visit once and then stay for life and have done so for generations.

The team values the trust they have built over the years, and continually strive to improve and exceed expectations in technology and eye care, while adding a personal touch.

They are exceptionally proud to be a part of the Better Sights, Better Grades program, which supports free eye exams and glasses to children and youth in need.

Broadway has a team of exceptional optometrists, some who have been with the clinic for decades, and some who are new. Read more about each of them:

The connection to this clinic runs deep for Dr. Thomas Rea, as his great-uncle, Herbert Armstrong, started the practice in 1912. Dr. Rea’s father was also a part of the practise, joining Armstrong & Rea in 1952.  Dr. Rea himself has been a clinic partner for over 30 years.

Dr. Rea is Vancouver born and bred, and his interest in optometry started early, as he worked in the clinic’s optical lab during the summer while still in high school. He graduated with an undergraduate degree in cellular biology from the University of British Columbia, before completing his doctorate degree at the Illinois College of Optometry.

Outside of work, Dr. Rea’s passion is boating, and during the summer he can be found cruising BC’s coastal waters.

Originally from Ontario, Dr. Bissonnette graduated from the University of Waterloo in 1979, where he received the Vodnoy Award for Clinical Excellence.  That same year, he moved to British Columbia and joined the long-established practice of Armstrong & Rea, eventually becoming a partner in 1982.

He is an active member of the British Columbia Association of Optometrists, having spent over a decade serving on the executive council, including two years as president from 1991 to 1993. His commitment to the highest professional standards and quality in eye care has led him to sit on a number of advisory panels including, most recently, the ISYS Vision Council and the FYidoctors Advisory Committee.  In 1998 the BCAO named Dr. Bissonnette Optometrist of the Year, and in 2002 awarded him the President’s Award.

Dr. Bissonnette is an avid golfer and cyclist, loves baseball, and has a black belt in Tai Kwon Do!

Her passion lies in the diagnosis and management of ocular disease and participating in clinical studies for new contact lens technology, as well as the clinical evaluation of students and new graduates. Since 2007, she has been involved with the Canadian Association of Optometrists improving the written exams and assessing the clinical skills for licensing new graduates.

Dr. Short has a love of travel, having work at the renowned LV Prasad Eye Hospital in Hyderabad, India. She has also been involved with a local eye charity, Third World Eye Care Society (TWECS), which works to collect, clean, sort and catalogue used eyeglasses for use on eye missions all around the world.  She has been to Bolivia, Cambodia and Kenya on different teams.

Dr. Louie joined Archer, Bissonnette & Rea in January 2012, and was thrilled to start working at the practice where he was once a patient.

When not at work, Dr. Louie spends his time with his wife and three young sons.  They enjoy travelling and great food.

Dr. Janda was born and raised in Vancouver. She obtained her Bachelor of Science from the University of British Columbia and continued her education at Aston University in Birmingham, UK where she graduated from their School of Life and Health Sciences with a Masters of Optometry.

Dr. Janda is passionate about helping both children and adults achieve optimal vision and ocular health and is devoted to learning and staying current with the latest research in eye care. Her special include ocular disease, low vison, contact lenses, pediatrics, binocular vision, neuro-ophthalmology, and glaucoma.

In her spare time, she enjoys travelling, jogging, hiking and spending time with her family.

Dr. Bantle is a newer addition to the Broadway team. Originally from Saskatoon, she has called Vancouver home since 2011. Graduating with honours from the University of Waterloo School of Optometry, she also received the Alcon CPE Award based on superior performance within the Contact Lens portion of the curriculum. She is currently looking forward to completing a fellowship with the Ocular Wellness and Nutrition Society, and recently became a certified Functional Medicine Practitioner.

Dr. Bantle’s passion for travel and optometry led her to participate in eye care missions both as a student and as a supervising doctor, where she provided free eye care and eye wear to people in need in Romania and Peru.

She enjoys seeing patients of all ages and strives to provide the best quality of care to her patients, practicing with a strong emphasis in long-term eye health.

Outside of work and travel, Dr. Bantle keeps herself busy with skiing, going to the gym, and yoga. She loves cooking, and even makes her own chocolate!

While he is not new to the FYidoctors family, Dr. Brezac is the newest addition to the Broadway team!

Dr. Brezac has been involved in FDA studies of Orthokeratology (overnight corneal reshaping contacts). With his extensive clinical experience, he ensures patients receive the best and safest form of vision correction to ensure optimal visual outcome. He is also passionate about ensuring the clinic is a leader in advancing technologies.

While he sees patients of all ages, Dr. Brezac has developed a special interest in children’s vision and is quickly able to make children comfortable in their eye exam experience.

When not at the clinic, you can find him coaching at the hockey rink or on the soccer pitch.

The team at FYidoctors Broadway is accepting new patients and looks forward to seeing you. Book an appointment with them here.