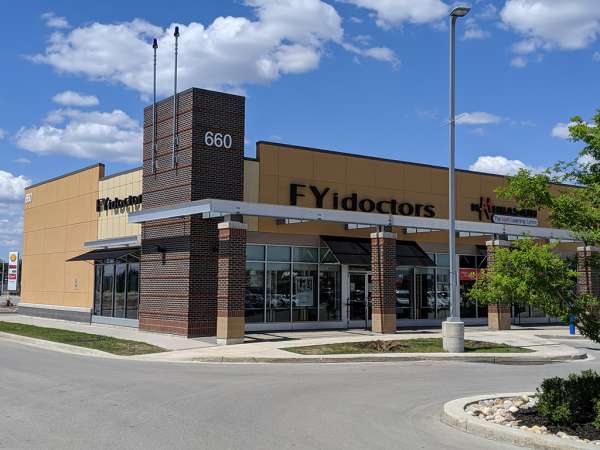 FYidoctors Winnipeg is welcoming two new optometrists to their team.

Dr. Gary Butterworth and Dr. Tyler Buffie will be joining Dr. Neil Campbell at the only FYidoctors practice in Winnipeg.

For Dr. Buffie, working under the FYidoctors umbrella has been a long-term goal.

“I have been practicing for about 10 years. Back in 2009, FYidoctors did a presentation at my school and I immediately realized their vision was aligned with mine as far as the future of the eyecare industry,” he says.

“I wanted to be a part of the club for a while, but they didn’t give me the keys. I had to buy my own practice and prove that I could run it,” he says, noting he bought an existing practice in 2015.

“Then over the past couple of years we decided it would be of mutual benefit to merge my practice with Dr. Campbell’s existing practice.”

Dr. Buffie says his vision is aligned with FYidoctors because the company is doctor-owned, doctor-delivered.

“We can control all aspects of how we deliver patient care,” he says. “You have hundreds of doctors united, which is proving to be much more powerful than each one of us at our own practices.”

Dr. Buffie attended the University of Winnipeg where he completed a Bachelor of Science degree. He then went on to complete his degree in optometry at the University of Waterloo. After travelling to Mexico and El Salvador on eyecare missions, he worked with local ophthalmologists—focussing in glaucoma and lens care for children after cataract surgery.

Dr. Butterworth also attended the University of Waterloo School of Optometry. Prior to becoming an eye doctor, he worked as a pharmacist for two years. He obtained his pharmacy degree from the University of Manitoba.

The clinic’s third optometrist, Dr. Neil Campbell has been with the Winnipeg location since its inception in 2014. He graduated from the University of Winnipeg with a Bachelor of Science before attending the Southern College of Optometry in Memphis, Tennessee.

In addition to the three accomplished optometrists practising at FYidoctors Winnipeg, the clinic’s staff is cross-trained to provide the most comprehensive patient care

“All of our staff are able to do everything,” says Practice Coach Christopher Nikkel, who has been with the Winnipeg clinic since the very beginning.

“We are proud of where we came from,” he says. “We started at almost zero—we went from seeing two to three patients a day to bringing in two new optometrists.

“We are a very word-of-mouth city, what keeps our patients coming back is the relationship that we build with them. We have been seeing some patients for more than 20 years.”

Nikkel stresses that the staff at the Winnipeg clinic puts the interests of their patients first.

“We are there for our patients,” he says. “We want them to feel confident with the level of care they receive and know that it is genuine.”

Nikkel adds that as Winnipeg is very isolated—what with their nearest neighbouring major city being Minneapolis—the clinic is unique to the FYidoctors family.

“We have built this clinic up basically by ourselves and we are proud of that,” Nikkel says. “We have made a very thriving business on our own.”

Part of that thriving business is the team’s ability to see challenges as an opportunity to grow.

“Working in eyecare, everything is a challenge,” says Dr. Buffie. “Sometimes it is challenging just to get a kid to sit in a chair, as small as that.”

“But even if I won the lottery,” he adds, “I would come back into work and do this. There are challenges, big or small, but anytime you are challenged you can grow.”

“Every day is different. Every patient that comes through the door is different and that is challenging because you never know what you are going to see each time someone sits down across the desk from you,” he says. “That keeps it interesting, because it is not the same thing over and over again.”

Outside of putting their patients first, the FYidoctors Winnipeg clinic is also very involved in the community.

“We are involved in Better Sight, Better Grades,” says Nikkel, noting that the program visits local schools to provide eyecare to children in need.

“Dr. Butterworth is especially passionate about doing a lot of remote work in northern communities, in addition to coming into the office,” says Dr. Buffie.

To learn more about the FYidoctors Winnipeg clinic, or to book an appointment with Dr. Buffie or Dr. Butterworth, visit our website.