Exploring the Possible Link Between Intellect and Eyesight 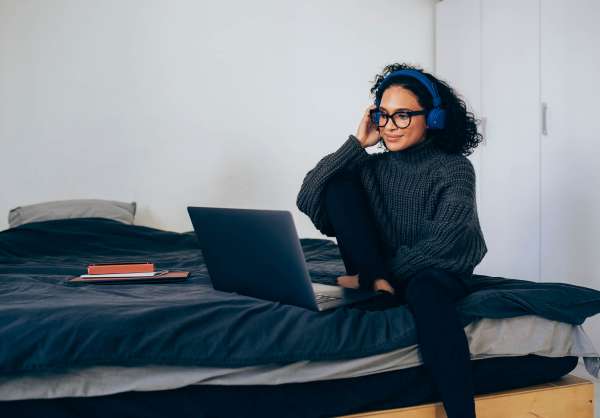 To mark Psychology Month, we did a deep dive into the often overlooked psychology of glasses. Based on our research, there’s one thing that’s very clear: Glasses can say more about those who wear them than meets the eye.

According to several studies, the stereotype that glasses make a person appear “smarter” might actually have some merit to it after all. Read on to find out why.

Before we delve into the scientific link between glasses and intelligence, let’s first explore how glasses have been represented as a symbol of smarts in popular culture throughout history.

Take Velma from Scooby Doo, for instance. She is known for her classic, thick black frames, which symbolize her most prominent character traits. Velma is recognized as highly intellectual, with a notable knack for science and problem-solving. Her thick-framed glasses visually emphasize her bold brains.

Of course, Velma is not the only example of a witty glasses-wearer in popular culture that comes to mind. Remember Dilton Doiley from the Archie Comics, who was known as the smartest teen in school? Or Elle Woods in Legally Blonde, who starts wearing glasses only once she decides to become studious?

Glasses have a long history of representing intellectual capacity, dating back to some of the earliest fairy tales and myths. Even before glasses became a common symbol of smarts, glass objects in general had been depicted in films and TV shows as having special powers to see into the future, such as the magic mirrors in Snow White and Beauty and the Beast.

Whether valid or not, there’s no doubt that glasses have been repeatedly used as a pop culture trope, and that same symbolism has transcended into everyday life. Studies do show that people perceive those who wear glasses as having a stronger intellect than their glasses-free counterparts—and in some cases, they actually do.

The link between myopia and education level

A 2012 study in Ophthalmology, for instance, explores the interesting correlation between eyesight and intellect. It contends that people who wear glasses not only look smarter, but often they actually are smarter. That’s because those who require eyeglasses are more likely to have spent additional time in school. According to the data, higher levels of education usually corresponds with a higher degree of eyestrain—and therefore a tendency to depend on glasses. Specifically, the study found that those with higher levels of education have a greater likelihood of suffering from nearsightedness, otherwise known as myopia.

A 2017 study drew the same conclusion. The study found several factors that contribute to myopia risk, including a lack of time spent outdoors, reduced light exposure, and socio-economic status. Educational attainment, though, seems to be the most significant, as it encompasses various additional factors, such as less time outdoors.

The notion that myopia is associated with intelligence isn’t exactly a new phenomenon. Correlations between higher intelligence quotients (IQ) and nearsightedness have been documented since the late 1880s. The relationship between intelligence and vision problems applies to children, too, as pediatric studies have demonstrated up to twice the risk of myopia for those in the highest IQ category.

The evidence doesn’t stop there: A 2018 University of Edinburgh study found that smart people are 30% more likely to have poor eyesight. The study, published in the the journal Nature Communications is the largest of its kind to ever be conducted, and it collected data from more than 300,000 participants between the ages of 16 and 102.

The study saw a “significant genetic overlap between general cognitive function, reaction time, and many health variables including eyesight, hypertension, and longevity.” Simply put, there seems to be a clear correlation between cognitive function and poor eyesight.

Beyond the tie between myopia and education level, there’s also something to be said about the power of glasses to reflect an individual's personality. An optometric assistant is trained in suggesting the correct glasses frame shape, size and colour based on your facial features and skin tone, which together can improve how others perceive you. In fact, there’s clear evidence that suggests that wearing glasses—whether needed or not—can make people think you are intelligent (among other qualities), even if you aren’t.

For example, researchers at the University of California studied whether jurors would be more inclined to give a verdict of innocence to someone wearing glasses versus someone who was not. According to the findings, people wearing eyeglasses were more likely to be seen as innocent. As such, it’s reasonable to suggest that along with being perceived as smart, glasses-wearers might also be thought of as honest.

According to New York lawyer Harvey Slovis, those who wear glasses in court “don’t look capable of committing a crime,” he said. “I’ve tried cases where there’s been a tremendous amount of evidence, but my client wore glasses and got acquitted. The glasses create a kind of unspoken nerd defence.”

In conjunction with representing innocence and intellect, glasses are also often worn simply as a fashion accessory (sometimes with no prescription) to evoke a sense of sophistication. Justin Beiber, for example, is sometimes spotted wearing specs. Clearly, geek is the new chic.

The truth is, it’s not entirely possible to draw a conclusive correlation between intelligence and glasses, since smarts are relatively subjective. Still, psychologically speaking, there is unquestionably a link between the two—whether perceived or real.

What is most important, though, is not necessarily how a person is perceived by others in their frames but how they perceive themselves. Wearing glasses should empower you, not just by correcting your vision, but also by showcasing your sense of style and unique personality. Perhaps your glasses speak to your smarts or your honesty—but most importantly, they should speak to you and make you feel like your best self.

Head to your nearest FYidoctors clinic today to try on some frames, or shop online.