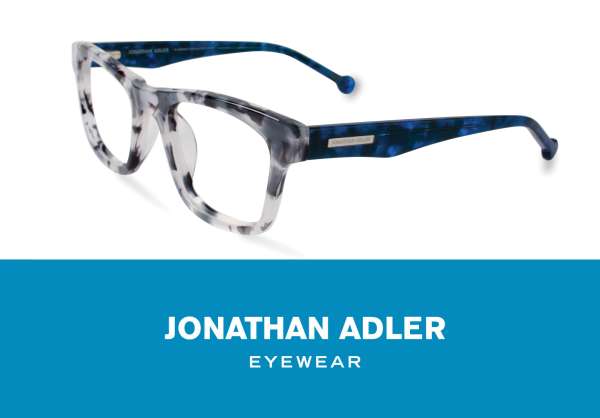 When it comes to style, Jonathan Adler is flying high. In the 90s, he worked hard to build a name in ceramics. Today, anything is fair game for this talented designer’s “Happy Chic” style. Pillows, furniture, and even Fisher Price baby strollers all pepper this talent’s diverse resume. FYidoctors is delighted that Jonathan has exclusively partnered with us to provide his glamorously designed glasses.

Today Jonathan enjoys a high level of celebrity. He has been showcased by Elle Décor magazine and acted as the top judge on Bravo’s Top Design. But his beginnings were less glamorous. Pottery was his first love, and he first spun a wheel at summer camp at the age of 12. He continued his clay work at the Rhode Island School of Design where his professor bluntly confided that he lacked talent.

Jonathan later moved to New York City, where he did odd jobs (allegedly getting fired from everything). Eventually, however, he started teaching classes in exchange for free studio space. When he’d finally created a collection that met his own exacting standards, he invited buyers from Barneys New York to check out his work, and they immediately ordered some.

In 1998, Jonathan opened his own store in SoHo, and his repertoire began expanding from ceramics, to pillows, to furniture. Each item further honed his “modern American glamour” style. More and more, people began to recognize his work, its modern styling, and its global pop culture influences. His work is chic and elegant, yet always has a sense of playfulness. Good taste without fun is utterly pointless, according to Jonathan.

His aesthetic sensibility was imparted to him in part by his parents. His father was a lawyer who spent most of his free time creating sculptures and paintings. His mother was a writer for Vogue, and her knowledge of fashion was evident in her bright style.

The sense of creativity which Jonathan’s parents imbued him with inevitably came to the surface. Today Jonathan writes books, makes television appearances, and designs anything and everything. On top of all that, he runs Jonathan Adler Enterprises. His work has taken him across the globe. He has collaborated with Starbucks, the Parker Palm Springs Hotel and Lacoste. He even designed the Barbie Dream House, filling it with fuchsia details.

Talking with The Telegraph, the ebullient designer laughed about the time he told his parents he was going to become a potter, and their obvious concerns. With tongue slightly in cheek, he conceded that becoming a potter may not be the best idea for others: “Anybody reading this should recognize that I am a unicorn and that it’s absolutely not possible to make a living as a potter.”

We’re excited to be the exclusive eyewear provider of Jonathan Adler. Featuring bold prints, vibrant colours, and modern twists on classic shapes, these glasses are just what your fall wardrobe calls for! All images featured are exclusive to FYidoctors. Book an appointment at your nearest location today.