Who are the Founding Women in Optometry? 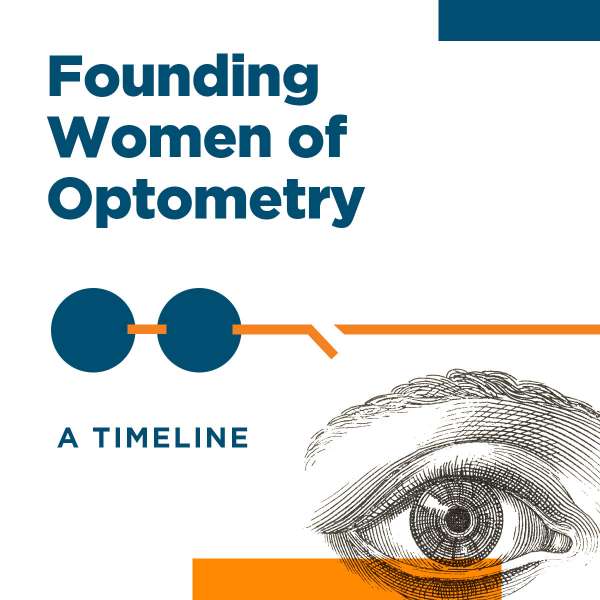 Today, the majority of optometrists are female, but not too long ago, that was far from being the case.

In honour of International Women’s Month, we’re diving deep into the history of optometry, and exploring the indelible impact women had on the development of the field. We’re aiming to shed light on the considerable contributions women have made to the optometry profession, and how they served to shape the field into what it is today.

How the profession of optometry started

As is the case with so many professional fields, women weren’t able to actively participate in optometry at its onset.

Optometry, which is the practice of examining the eyes, dates back 3,000 BC, though women weren’t on the scene until much, much later. It wasn’t until the 20th century that women were truly welcomed into the optometry field—and even then, there were major obstacles standing in their way.

The first ladies of optometry

When the American Optometric Association (which then was known as the American Association of Opticians) was founded in 1898, there were 183 members, only two of which were women. Edith Gallup was one of those two, and she was a champion of prospective female optometrists, and was known for encouraging other women to practice in the field. In her own right, she was a respected optometrist and lecturer, and in 1907, she was elected vice president of the AOA (becoming the first woman to hold the position).

Then there was Gertrude Stanton of Minnepaolis, who is the first recorded woman to ever receive her doctorate in optometry, which she obtained in 1899. She was closely followed by Dr. M. Armstrong, who launched her own practice in Texas.

Elva Cooper was also an early optometric influencer, as she became the second vice president of the AOA. In 1911, while filling in for her superior during an important meeting, a petition was circulated urging her to step down. She persisted and became the presiding officer of the organization, paving a path for women to apply for optometric leadership roles.

Of course, there would be no optometrists without optometry schools. Mae Booth-Jones emerged as the first female president of an optometry school, the Washington School of Optometry in Spokane, Wash., marking another major milestone for women in optometry.

Canada got off to a bit of a slower start in the field of optometry than its American counterpart. It wasn’t until 1909 that the first Canadian provincial optometry acts were passed in Ontario and Manitoba, and the legislation largely mirrored what was previously passed in New York in 1908.

As was the case south of the border, it took some time for women to integrate into the profession in Canada, too. In 1936, Sadie Marion Lampard became Alberta's first certified female optometrist. According to her obituary, Lampard was fiercely passionate about education, and graduated from the School of Optometry in Toronto at the top of her class. Lampard opened her practice in 1942, which she continued to run until 1993.

Throughout Canada, women slowly started to join the optometry field, not only emerging as optometrists, but also taking on various leadership and mentorship roles, such as clinical supervisors and lecturers at prestigious schools across the country.

Other noteworthy women in optometry

While women initially struggled to break into the industry, so, too, did people of colour. The renowned Patricia Bath—the iconic inventor of laser cataract surgery—became the first Black woman to complete a residency in ophthalmology in 1973. Bath then went on to become the first Black female doctor to receive a medical patent.

Bath’s impressive resume doesn’t stop there: She also became the first female faculty member in the Department of Ophthalmology at UCLA’s Jules Stein Eye Institute, and she co-founded the American Institute for the Prevention of Blindness in 1976.

Recently, Bath was inducted into the U.S. National Inventors Hall of Fame, for her revolutionary work in cataract surgery. She became one of the first two Black women to achieve the honour in history.

Joan Exford is another woman worth mentioning. In 1993, she was named the first female president of the American Academy of Optometry (AAO), followed by Karla Zadnik in 2010, and Barbara Caffrey, who is a Toronto-based optometrist, now serving as a member of the Board of the AOA.

The optometry profession has changed dramatically in recent years, and women are much more at the forefront of the field than they were historically. Let’s not forget, as recently as the 1980s, women had countless barriers to overcome before they could successfully enter the optometry workforce. Fortunately, things have changed for the better.

Data demonstrates that in 2011, 64% of optometrists in Canada were female, marking a 48% increase from the statistics in 1991. Today’s numbers aren’t entirely clear, but evidently, progress has been made.

Much of that progression is owed to the first female optometric leaders, who—despite having many obstacles in their way—paved a path forward for future generations of women to freely and enthusiastically practice optometry.