Why Are Your Eyes The Colour They Are? 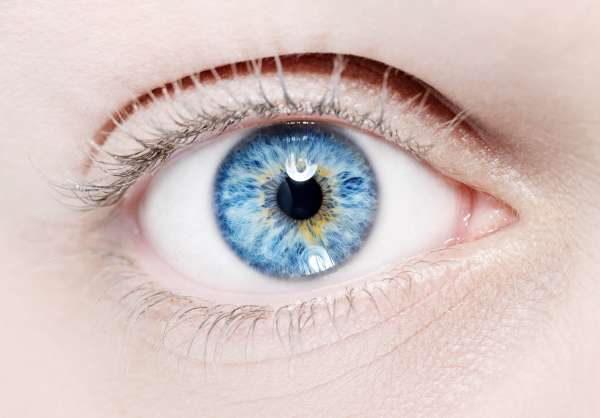 Have you ever wondered why your eyes are the colour they are? The answer to the question is far more complex than you might think. Even scientists are somewhat puzzled by it.

It’s not as simple as two brown-eyed parents equals a brown-eyed child. While genetics unquestionably play a huge role in determining one’s eye colour, there are other factors at play. A person’s eye colour is created from pigmentation of the iris, which is the coloured part of the eye that surrounds the pupil. In essence, eye colour is determined by the amount of melanin, the same pigment that turns your skin brown after being in the sun, in the iris.

The colour of irises can range from deep brown to light blue, but the most common colours are brown, green, hazel, and blue. While brown is the most common eye colour (between 55% and 79% of people in the world have brown eyes), lighter colours, such as blue and green, are much less common, and are typically only seen in those of European ancestry.

Brown eyes are so common, in fact, that many scientists believe 10,000 years ago, every human being had brown eyes. Some research indicates that blue eyes started off as a genetic mutation, which affected the production of melanin.

Melanin—specifically the quality and amount of it in the front layers of the iris—is directly related to a person’s eye colour. Those with blue eyes have much less melanin in the iris than those with brown eyes.

Eye colour is not simply a blend of each parents’ eye colour. It’s a lot more complicated than that. Researchers have so far found 16 genes that determine eye colour, making the inheritance pattern quite complex. So while looking at a person’s parents’ eyes might offer some insight into their eye colour, genes can mix and match in a multitude of different ways.

Our bodies are made up of 46 chromosomes, which are divided into 23 pairs. Every pair consists of one chromosome from each parent, and chromosomes are all composed of genes. Our genes are what determine our eye colour, as well as how many of our other features will ultimately develop.

While scientists presume 16 genes are responsible for contributing to our eye colour, the two central ones are OCA2 and HERC2, which are both part of chromosome 15. Our genes are instrumental in dictating how much melanin is produced in the iris, thereby determining the deepness and shade of one’s eye colour.

Ever wondered why many babies are born with blue eyes? That’s because melanin is not fully developed at birth, rather, production occurs over time. A child’s eye colour, just like their hair colour, is usually not definitive until age three.

So, given the number of genes that can contribute to a person’s eye colour, it’s entirely possible that two parents with brown eyes can have a child with blue eyes. Since a baby inherits half of their genes from one parent and half from the other, the way those unique genes interact can lead to an entirely different eye colour than either parent has.

That being said, according to the American Academy of Paediatrics, the following is true:

- Two parents with a similar eye colour are most likely to have a child whose eyes match theirs.

- If one of the grandparents has blue eyes, the odds of having a baby with blue eyes increases slightly.

- If one parent has brown eyes and the other has blue eyes, the chances of having a brown-eyed or blue-eyed baby are about the same.

If you want to get even more into the nitty gritty, here are some percentages: 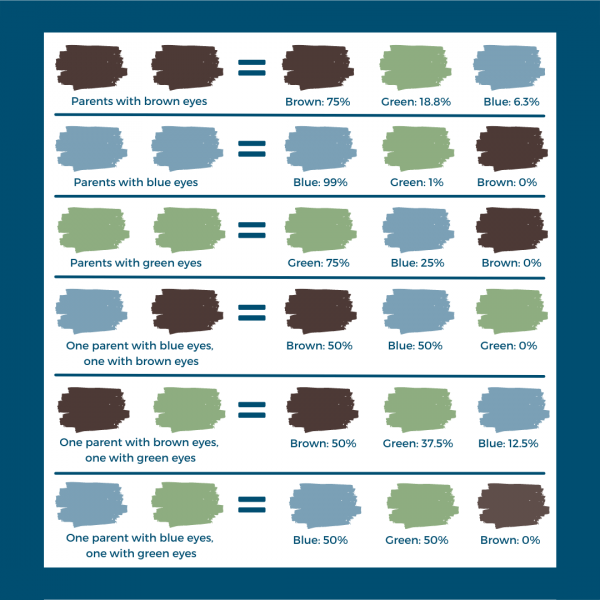 So while you can reasonably try to predict the eye colour of an unborn child based on the genetics of their parents, it’s definitely a toss up.

Beyond a baby’s eyes changing from blue at birth to brown as a toddler, some fully grown individuals experience changes in their eye colours, too, whether it’s from certain lighting or if they wear a colour that enhances the shade of their eyes.

This happens because the iris is composed of two layers, and often in those with blue or green eyes, the front layer has very little melanin. That’s why, depending on the lighting, their eyes may appear lighter or darker due to the diffraction of light.

In any case, heterochromia is typically harmless, and it often occurs due to development differences in each iris. If a person develops heterochromia later in life, it is usually triggered by an eye injury, glaucoma, or another syndrome or illness.

The truth is, scientists are still discovering new factors that explain eye colour, and it’s likely that our understanding of it will continue to evolve over time.

Remember, not too long ago, it was believed that eye colour was solely determined by one gene: brown is dominant, and blue is recessive. Recent research, however, has demonstrated that there are multiple genes at play in producing one’s eye colour.

What is true, scientists say, is that every eye colour is completely unique. That means there is no one else with your exact eye colour. Hopefully, in the coming years, we will have a clearer glimpse (pun intended) into how eye colour comes to be.