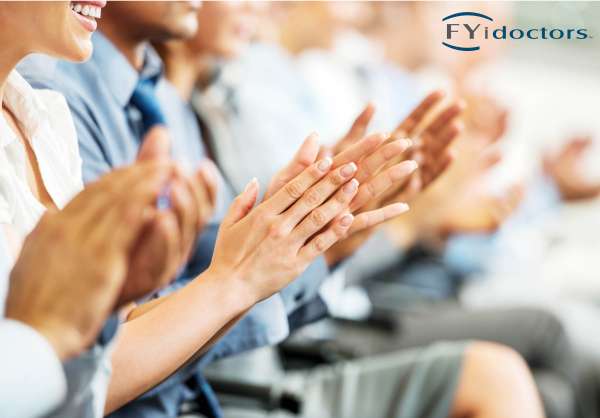 Three FYidoctors optometrists were recently recognized for their achievements in the field, and we could not be prouder to have them on our team.

The esteemed ODs were acknowledged at the Annual General Meeting for the Saskatchewan Association of Optometrists (SAO), held in June.

Dr. Jake Kelly was awarded Young Optometrist of the Year. This honour goes to an optometrist who has practiced less than 10 years and is passionately contributing to the field of optometry, while exemplifying exceptional leadership abilities. Dr. Kelly graduated from the University of Waterloo in 2010 and joined FYidoctors to work out of the Regina-Northgate, Regina-Victoria Square, Assiniboia, and Kipling clinics. He joined the SAO Council in 2015 and currently sits as the Chairman of the Communications and the Public Awareness Committee.

Dr. Kelly currently practices out of the Assiniboia, Saskatchewan clinic, and more info can be discovered about him on our blog.

Dr. Kevin Woodard was recognized and thanked for his many years spent on the Council (where, for the past few years, he served as President and Past President). Dr. Woodard has been active in furthering political causes in Saskatchewan  and, as a result, has developed some valuable relationships. He practices out of the Watrous, Saskatchewan clinic.

Dr. Robert (Bob) Degelman took home the highest possible award by the SAO.  For his 51 years of service to his patients and many decades with the SAO, he received an honourary lifetime membership to the professional organization. Dr. Degelman was instrumental at a time when optometry was barely recognized. He helped have the skill acknowledged by government and subsequently developed it to the point where it became an integral part of the health care system. Take a look at the speech he delivered at the SAO’s recent joint luncheon.

While all of our doctors help to further the visual health of Canadians every day, we are especially proud to share the achievements of these professionals.

To book an appointment with one of our highly skilled FYidoctors optometrists, contact a location near you.