Heart Eyes: What Your Eyes Reveal About the Health of Your Heart 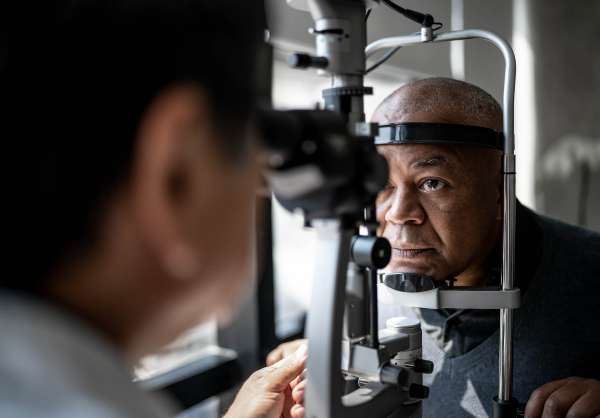 Did you know that eye scans can provide essential information about your heart health?

The age-old adage that the eyes are the window to the soul has merit in many regards, including in the world of heart health. Indeed, new studies show that ocular imaging, commonly known as eye scans, can offer useful insight into a person’s cardiovascular status, and help determine an individual’s personal risk of experiencing a heart attack. There’s now one more reason—among countless—why it’s important to get your eyes routinely checked.

Firstly, it’s important to note that doctors have long understood that changes to the retina’s blood vessels can be indicative of vascular issues.

Scientists from John Hopkins University conducted a study in 2013, which followed more than 10,000 people for a period of 14 years. The analysis showed a possible link that those who had damage in the smallest blood vessels of their eyes had a higher chance of being diagnosed with a heart rhythm disorder known as atrial fibrillation. Although many arrhythmias will never cause health problems, they can cause troublesome symptoms, such as dizziness or chest discomfort. Other more dangerous arrhythmias can impact blood supply and require medical management. Left untreated, they can eventually lead to stroke, heart attack, heart failure, or sudden death.

Atrial fibrillation (afib) is the most common arrhythmia. Different types of atrial fibrillation may last for seconds or be permanent. The condition is more common in older people and can have many different causes.

Atrial fibrillation (which increases a person’s chances of having a heart attack) is a common condition among older adults, and early symptoms can be tough to spot. Plus, it is far more convenient for doctors to examine eyes, as the condition can be difficult to detect in the heart itself.

Generally speaking, routine eye exams have been known to catch risk factors for heart disease before there are significant symptoms. As such, booking yearly eye exams has long served as an excellent preventative tool for heart issues.

Fortunately, in recent years, advanced technology and artificial intelligence has made the process of detecting heart concerns through eye scans even simpler—and more nuanced.

Research conducted by the University of Leeds led to a unique AI system that can identify patients—via a retinal scan—who were likely to suffer a heart attack within a one-year time period. The artificial intelligence system in question employs “deep learning techniques,” which use a series of algorithms that enable a computer to recognize patterns in a set of data.

The technique was found to be 70% to 80% accurate, according to researchers, and would therefore be a solid starting point prior to further diagnostics. Scientists contend that using such artificial intelligence systems on retinal scans could completely revolutionize the screening process for heart disease.

“Retinal scans are comparatively cheap and routinely used in many optician practices. As a result of automated screening, patients who are at high risk of becoming ill could be referred to specialist cardiac services,” said Professor Alex Frangi, who supervised the study.

Given that cardiovascular disease (including heart attacks) are the leading cause of early death around the globe, “the scans could also be used to track the early signs of heart disease,” he continued.

As part of the study, researchers examined the retinal scans and cardiac scans of more than 5,000 patients, and the AI system they created drew parallels between pathology in the retina and notable shifts in the patient’s heart patterns.

The AI system is so smart, in fact, that it is able to estimate the size and pumping ability of one of the heart’s four chambers from the retinal scans alone. Based on the size of the heart’s left ventricle, coupled with its pumping capacity and other demographic data (such as age and sex), the AI system is able to estimate a person’s risk of enduring a heart attack within the coming 12 months.

Prior to this innovation, the pumping efficiency of a patient’s left ventricle (which is one of the heart’s four chambers) was only able to be determined through costly diagnostic tests, including echocardiography or magnetic resonance imaging. Given that these tests are expensive and require advanced equipment, they are generally only available in a hospital setting, and are largely inaccessible in nations with poor health infrastructure.

If an AI solution such as the one outlined in the aforementioned study were to be widely adopted, it would be a major breakthrough in the medical world, as it would not only cut the costs associated with diagnosing heart disease, but it would likely also prevent countless patients from experiencing worsening cardiovascular conditions—as it has the rare propensity to detect problems at an early stage.

Using our eyes as a window to our hearts is a promising concept, and several companies are currently investing in expanding tools and systems that draw on the strong relationship. For instance, Tesseract, a portable eye scanning company, raised US $80 million for a new diagnostic platform, which uses high-tech binoculars to diagnose eye diseases, as well as cardiac and neurological conditions.

As we know, technology is constantly evolving, and new innovations are no-doubt on the horizon. Given that our eyes clearly offer valuable insight into other aspects of our overall well-being, going for regular ocular exams is an important way to protect and preserve your health. Book an appointment today at an FYidoctors clinic near you!