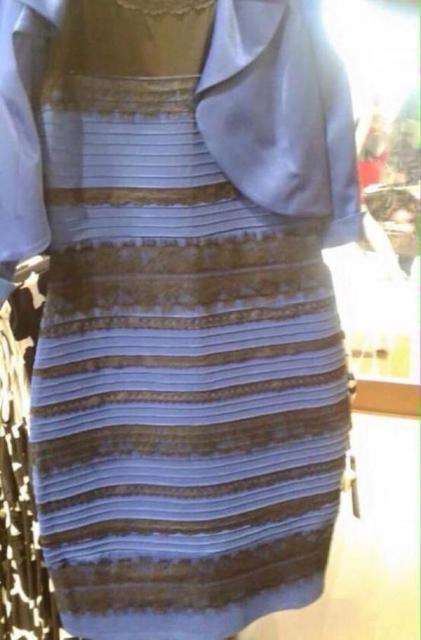 Meet the dress that broke the Internet. Originally posted on Tumblr by 21-year-old singer Caitlin McNeill, the photo has since gone viral and caused a huge amount of debate in the process. That's because 75% of people see the dress as gold and white, while the remaining 25% see it as black and blue (or in some cases blue and orange). Why is this the case?

The key, however, is that colour is actually determined by whatever light wavelengths happen to be in the area at the time and are reflecting off the object.

Most of the time that system works just fine. The dress image though, hits a kind of weird visual boundary that rarely happens. Depending on how your brain works and the light around you at the time, your brain will either discount the blue wavelength (so you end up seeing white and gold) or it will discount the gold wavelength (in which case you end up seeing blue and black).

There you have it: a basic rundown of why this simple dress has caused so much colour controversy. For the record (and perhaps adding a little more fuel to the online fire), the dress is officially described by its owner as being blue and black.

For more information on how your eyes work or to book an eye exam, find an FYidoctors near you.