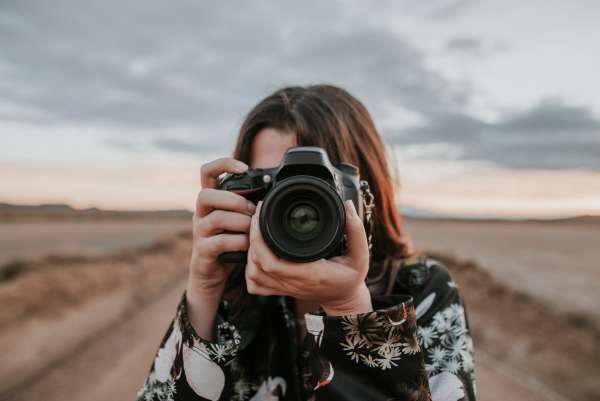 Before technology brought a high-quality camera to everyone’s pockets, nature gave us a camera-like structure of our own: the human eye.

What do we know about how cameras work, and what does that have to do with the human eye? Let’s zoom in and take a look.

How it Works: The Human Eye

The human eye may be an incredibly complex structure, but the gist of how it operates is quite simple. Let’s say you’re looking at a bright orange pumpkin. Light reflecting off of the pumpkin enters your eye through the cornea (the clear surface of the eye). The light then passes through the pupil. The iris can constrict along the circumference of the pupil, controlling the amount of light entering the eye. The light then hits the lens, which focuses it when it hits the retina. (the light-sensitive nerve layer at the back of the eye). When the light passes through the lens, it’s inverted, so the pumpkin will present itself upside-down on the retina. Does that mean we see everything upside down? Yes! Luckily, our brains flip the image so we can perceive things right-side-up.

How it Works: The Film Camera

Film cameras operate according to the same principals as our eyes. Light enters the camera lens, which consists of several layers of glass that focus the light. Like our eye’s iris, the camera aperture constricts as necessary to control the amount of light that enters. When the shutter release is pressed, the shutter opens up (usually just for a fraction of a second). For that short time, light passes through to hit the light-sensitive film, projecting the inverse image there.

How it Works: The Digital Camera

Digital cameras take the process one-and-a-half steps further, though it took until the mid-90s before the technology became mainstream. The reason: it took developers quite some time to figure out how to replace a piece of light-sensitive film with something mechanical.

The solution to the problem was the image sensor, and it’s an ingenious little piece of tech. The most common type is called a CMOS (complementary metal oxide semiconductor), which is a light cell whose surface is covered in tiny pixels, each with a photodetector. The more pixels, the sharper the photo’s resolution. A 1,000 x 1,000-pixel sensor, for example, creates a 1,000,000 pixel (1 megapixel) image. The pixels quickly send the light info out to where it’s stored (or reassembled on a screen for our viewing pleasure).

This sort of technology is improving by the day and being made available at cheaper and cheaper prices. The accessibility of camera technology has had a significant impact on the way we live our daily lives: recording important events, capturing beauty, and helping us understand our eyes a little better.

For more information about the relationship between technology and the human eye, read our blog or reach out to one of our eye care professionals near you.