Why Our Eyes Are Different Colours 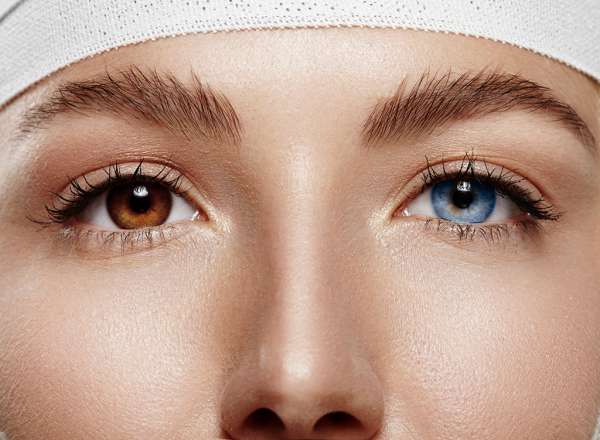 Your eyes say a lot about who you are, but the differences in colour are about more than how you look. In fact, the genetics of eye colour is a lot more complicated than scientists once thought.

That's because eye colour is the result of variations in the amount of melanin, a pigment found in your iris (as well as your skin) that offers protection from harmful UV rays. If you have lots of melanin you'll develop brown eyes, if you have a moderate amount of melanin you'll have green eyes, and if you don't have very much melanin at all, you'll end up with blue eyes (which is why most babies are born with light bluish eyes – because their bodies haven't yet produced any melanin).

Variations in melanin levels can also result in a variety of different shades of eyes, for example blue-green, hazel and dark brown eyes. Some people also have eyes that have different coloured patches, such as blue eyes with a green or brown circle around the pupil. That's because different parts of the iris produce different amounts of melanin. Some people are even born with eyes of two different colors, a condition known as heterochromia.

Most cases of heterochromia are genetic or hereditary and are present at birth. These cases are largely benign; however, two different coloured eyes can be a symptom of another more serious disease, in which case a comprehensive eye test should be performed to rule out any potential issues. Acquired heterochromia develops later in life and can be caused by eye injuries and certain medications.

There are three types of heterochromia: complete, partial, and central. Complete heterochromia is the most striking, with one eye completely different than the other. Partial only affects some of the iris, and in the case of central, only portions of the iris near the border of the pupil are a different colour.

A few conditions are often confused with heterochromia, one of which is anisocoria. Anisocoria is fairly common, affecting about 20 percent of the population to some degree. The condition occurs when one pupil is larger than the other. Usually, the difference is slight and subtle. However, in the case of the late, great David Bowie—where a traumatic eye injury in his teens permanently dilated his pupil—the condition is pronounced and is often mistaken for heterochromia.

While uncommon in humans, heterochromia occurs quite frequently in several dog and cat breeds, where it almost always involves one blue eye. Complete or partial heterochromia is common in the Siberian Husky, Aussie Shepherd, Border Collie, Sheltie, Corgi and Dachshund, among others, and cat breeds originating from the Middle East and Asia.

The Genetics of Eye Colour

According to scientists, the colour of eyes has also changed a lot as humans have evolved. In fact, thousands of years ago, early humans all had brown eyes. Blue eyes only developed as a genetic mutation that was eventually passed down to future generations. That means every blue-eyed person on the planet can trace their genetics back to one single common blue-eyed ancestor (whoever he or she was).

The way scientists predict eye colour has also changed a lot over the years. In the past, researchers believed that brown eyes were considered dominant over both blue and green eyes, and that green eyes were dominant over blue eyes. And while this is true for the most part, it's not quite as cut and dry as we once believed.

Humans now carry a wide assortment of genes, meaning you could end up with blue or green eyes even if you come from a family where your relatives had brown eyes for generations. That said, the odds are that you will have brown eyes. Contrary to popular belief, it's also possible for two blue-eyed parents to have a brown-eyed child.

The type of eye colour also varies according to your ethnicity. For example, the percentage of dark brown eyes found in Asian and African populations will be much higher than in European populations. Some day, blue eyes may once again be a rare eye colour as more people now select partners from outside their cultural and ethic groups. When a brown-eyed person marries someone with blue eyes, their children are more likely to inherit the more dominant brown eyes.

Whatever your eye colour may be, what is important is that true beauty is in the eye (and genetics) of the beholder.

To get a complete eye exam or if you’re interested in learning about coloured contact lenses, visit an FYidoctors near you.