Causes and Treatments for Astigmatism 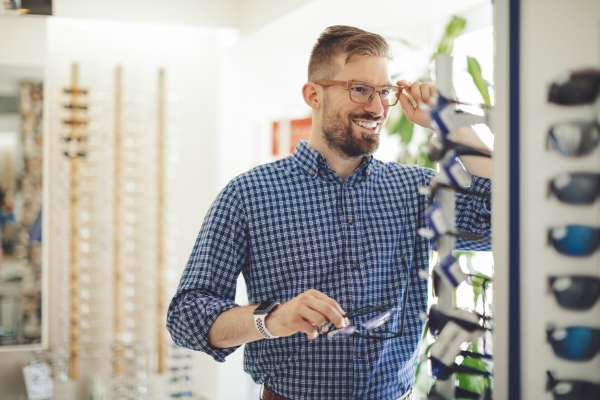 Astigmatism is probably the most misunderstood vision problem—despite that fact that it affects millions of Canadians. So what exactly is astigmatism?

Like nearsightedness and farsightedness, astigmatism is a type of "refractive error", a common condition that deals with how your eye focuses light. In an eye with astigmatism, light isn't able to come to a single focus on the retina to produce clear vision. Instead, the light enters through multiple focus points, either in front of the retina or behind it.

Astigmatism Symptoms
Astigmatism usually means that your vision will be blurred or distorted to some degree both at near and far distances. Symptoms of uncorrected astigmatism often include eye strain, squinting and headaches, especially after reading or other prolonged visual tasks.

Causes of Astigmatism
Astigmatism is typically caused by an irregularly shaped cornea. Instead of the cornea having a symmetrically round shape, it is shaped more like a football, with one "meridian" being significantly more curved than the meridian perpendicular to it. To understand what a meridian is, think of the front of your eye like the face of a clock. A line connecting the 12 and 6 is one meridian; a line connecting the 3 and 9 is another.) The steepest and flattest meridians of an eye with astigmatism are called the "principal meridians." In some cases, astigmatism is also caused by the shape of the lens inside the eye. This is called lenticular astigmatism, to differentiate it from the more common corneal astigmatism.

Types of Astigmatism
There are three primary types of astigmatism:

In some cases, irregular astigmatism is caused by an eye injury resulting in a scarring on the cornea, as well as from certain types of eye surgery or diseases.

Detecting Astigmatism
Astigmatism often occurs early in life, which is why it's incredibly important for your child to get tested as soon as possible. (Health Canada recommends that school aged children be given comprehensive eye exams at least once a year or as soon as you notice any change in their vision).

The good news is that astigmatism is relatively easily to detect during an eye exam, which your optometrist using the same instruments and techniques that he or she would use to detect nearsightedness and farsightedness.

Astigmatism Treatment
Like nearsightedness and farsightedness, astigmatism can usually can be corrected with eyeglasses, contact lenses or refractive surgery.

To get tested for astigmatism, book an appointment with an FYidoctors optometrist near you.