Quinan, Nova Scotia Is North America's First UNESCO Starlight Tourist Designation: Meet the Blind Astronomer Who Made it a Reality 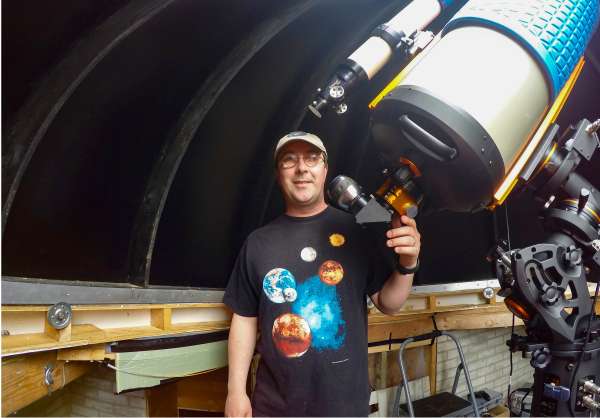 Astrophotography, the process of taking pictures of anything in space, is a highly specialized area of photography that stems from astronomy, the study of celestial objects. Considered one of the oldest sciences, the study of stars and stellar evolution is fundamental to our understanding of the universe. With vision typically being a basic requirement to be successful in any area of photography, it is an amazing feat that legally blind Canadian Tim Doucette is known as one of the top astrophotographers in the world, and even runs his own astrological observatory based in Quinan, Nova Scotia.

Doucette operates Deep Sky Eye Observatory about 20 minutes inland from the town of Yarmouth. Quinan has approximately 320 inhabitants. Doucette was blind for the first year of his life due to cataracts clouding the lens of his eyes. Because the first six months of a baby's life is when the eyes develop, Doucette’s vision did not develop properly.

To remedy this, doctors attempted to remove the cataracts by way of surgery. Back in the 1970s, cataract surgery involved removing the lens of the eyes.

The surgery also left his eyes permanently dilated, requiring him to wear sunglasses most of the time. At night, however, Doucette claims he has “super night vision” and can see better than the average person. The lens of the human eye provides magnification and filters out certain wavelengths of light such as ultraviolet and infra-red. After the surgery removed most of his lenses, Doucette’s vision is not restricted by those filters.

Later, in the early 1990s, Doucette’s vision began to deteriorate even further. He underwent surgery to clean up scar tissue on his eye and to remove the remaining portions of the lenses in his eyes.

He describes his sight as being similar to a 1-megapixel camera when compared with someone of normal vision seeing with 10 megapixels.

“Many objects emit tiny amounts of this light, which are filtered out by the lens of the eye,” said Doucette, who only knows of one other person in the world with the same condition. “My retina seems to be extra sensitive to light and hence I'm able to see faint 'deep sky' objects which most people cannot.”

His vision is now graded at 10% compared with normal vision, making him legally blind.

The telescope inside the observatory. Source:Tim Doucette.

A passion for the sky

For as long as Doucette can remember, he has been fascinated with space. For his 12th birthday, his parents gave him his first telescope. But it wasn’t until his wife encouraged him to purchase a reflector telescope that his passion for astronomy reignited. Fast forward 15 years, and a mass of published astrophotographs later, Doucette realized that his hometown of Quinan was actually one of the darkest sky sites in North America.

He worked with UNESCO to designate the tiny village in southwestern Nova Scotia as the first certified Starlight Tourist Destination in North America. From there, launching an astro-tourism business was the only thing left for Doucette to do.

“We opened last summer and were booked every night,” said Doucette. “We had to turn people away because we only take small groups to provide a personal and unique experience. We are focused on learning.”

Doucette teaches the basics of astronomy and leads groups as they observe the area’s dark skies.

“I use a wireless game controller so I can instruct the computer and telescope, and so I don’t have to be looking at a screen at any time,” he said. As well, Doucette uses many forms of telescope lens eye pieces and magnification on a massive 30-inch computer monitor in order to edit his photographs.

A shot of the moon. Tim Doucette.

Future plans for Deep Sky Eye Observatory include incorporating accommodations for the ultimate starlight getaway in the coming years. For more information on Doucette and the observatory, check out his site.