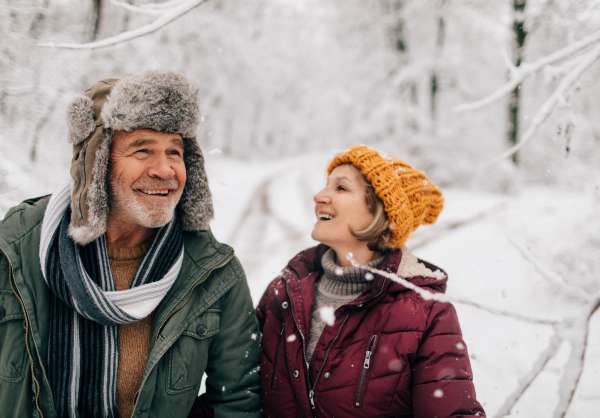 February is Age-Related Macular Degeneration (AMD) Awareness Month, an important time for awareness regarding the leading cause of blindness in North America in those over the age of 55.

Over 1.4 million Canadians live with macular degeneration. It can often be symptomless, and if left untreated, it manifests itself as blurred central vision.

Below is a breakdown of what AMD is, and how it is treated, and the importance of scheduling a regular eye exam.

When breaking down the name “Age-Related Macular Degeneration”, there is one word that stands out: macular.

The macula is a part of the retina, centered at the inner layer at the back of the eye. It is responsible for high resolution, detailed vision that is possible in favourable light conditions. A breakdown in the macula most often means that photoreceptor cells (which are responsible for detecting light reflected from an object) are lost. Degeneration most often begins later in life and women esspecially are more affected, making up two-thirds of the worlds blind or visually impaired populations.

The recommended way to stay on top of any developing issues is to routinely check in with eye exams. Because AMD is often symptomless at the beginning, detecting it in the early stages may be the most expedient way to begin treatment before vision irregularities begin. Lifelong UV protection and good nutrition are also considered key players of prevention by the Canadian Association of Optometrists. Learn more about how diet and UV exposure affects your sight.

There are two types of AMD; wet and dry. The dry form of degeneration of the retinal tissues is more common, progressing slowly over time. The wet form attacks close to 10% of all cases and is caused by leaking from weakened blood vessels, with symptoms progressing much faster.

Slightly blurred central vision when working on detail-oriented tasks is most often considered the first symptom of AMD. If vision on the peripheries is sharp, but objects straight ahead are seen out of focus, it may be time to speak to an eye doctor. Over time, the blurriness might spread, lines may look wavy or distorted, and dark spots can blank out some of the central vision. Many eye conditions can cause eventual blindness with AMD being considered the most prevalent among them.

While prevention is considered the best policy in any health field where it may apply, every person and how they develop symptoms is different. Vitamin supplements are standard first steps in trying to slow down the development of dry AMD, and Anti-VEGF injections help to slow the advancement of wet AMD.

Below are three of the newest treatments developed to combat many ocular diseases and conditions that directly benefit those with macular degeneration:

Artificial retinas, sometimes referred to as bionic eyes or retinal prothesis, are implants that aim to replace lost photoreceptors inside the eye, or to mimic their function. The constantly developing technology available may be able to surgically implant an electrode array into the eye and use a camera to capture light and transform it into electrical signals that activate the surviving retinal output neurons. As explained by the Stanford Artificial Retina Project, the only existing retinal prosthesis approved for implantation is the Argus II, allowing patients to detect large objects, people, cars, and large numbers or letters. These steps forward and are being tested and implemented, but more research and encoding is still necessary for clear vision available without the continued use of a cane or guide dog.

A second type of artificial retina may be on the horizon. The Journal of Neural Engineering has recently released a study of a 3D biohybrid retinal. This project takes layers of cell cultures that can be selected in a range depending on what type of treatment is needed. These retinal cells are cultivated in silk fibroin-based biofilms in vitro, and are said to be capable of being used in cell replacement therapy for AMD and other neurodegenerative diseases.

Gene therapy is argued to be ideally suited for ocular diseases, as the eyes are quite isolated immunologically. In the past, gene therapy was mostly used with success on patients who experienced genetically inherited eye conditions. Read our article on an array of technologies combating blindness, and how injecting a harmless virus improved the vision of one Ontario lawyer and allowed his photoreceptors to function.

With clinical trials underway, gene therapy treatments to combat non inherited ocular disorders and diseases may not be a far-off reality. In a recent article published by the European Society of Cataract and Refractive Surgeons, the topic of gene therapy for AMD is looking positive. “Dr Kiss, Director of Clinical Research and Associate Professor at Weill Cornell Medical College, New York, said that initial trials of therapies such as RGX-314 (RegenexBio) and ADVM-022 (Adverum) have shown promise for the treatment of exudative AMD.” This means potential treatments for the quicker spreading wet AMD.

What Can You Do for Your Eyes?

In the current climate, the recommendation is to follow health and protective guidelines such as a healthy diet and UV protection. Vigilance and regular eye exams are the most effective tools to uncover the condition and begin treatment. Another behaviour that heightens the risk of AMD developing is smoking. While AMD is traditionally associated with the aging process, smokers have two to three times the risk of developing degeneration when compared to those who never smoke. Read our blog on which eye diseases smoking affects.

AMD usually starts presenting in adults over the age of 55, and in most cases, eye exams for Canadian seniors are fully or partially covered by the provincial government.

Your FYidoctors optometrist can help you set up an appointment and help you determine if the exam is covered. Click here for bookings and more information.