How Do Virtual Reality Headsets Affect Your Vision? 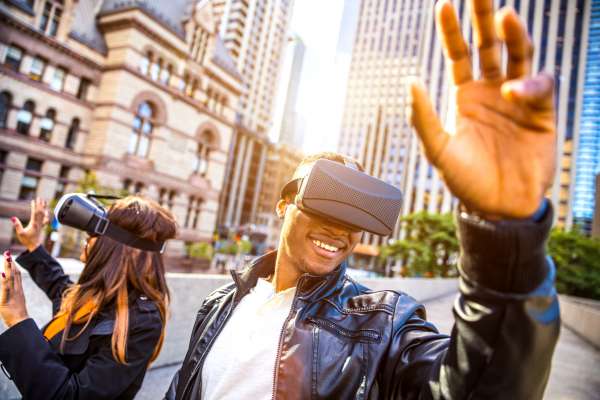 Virtual Reality technology has been growing rapidly over the past few years. Many Canadian cities are moving on from the traditional arcade in favour of virtual reality gaming experiences. VR games immerse the player into the game world in a way that has never been done before. Instead of playing a video game from a third-party point of view (or an attempt at first-person gameplay on a 2-D screen), VR makes the player feel like they are actually inside the game; players even use their own bodies to perform actions inside the game.

While there’s a lot of excitement about this technology, there are also some well-founded fears about how it might affect the eyes in the long term, because the experience of looking at objects in the real world is so different from that of seeing objects in the virtual world.

For instance, in the real world, our eyes need to focus and converge on a point in space when we look at it – a reflex known as the accommodation-convergence reflex. Our brains know that the distance we need to converge our eyes is the same distance we need to focus our eyes. In the virtual world, our eyes are always focused on a fixed point (looking at the screens inside the headset) while attempting to converge or diverge towards objects that appear nearby or distant. The disconnect is known as the vergence-accommodation conflict, and it’s why many people experience nausea or headaches when using VR headsets. There have been enough issues with this sickness that it has even been named: cybersickness.

Another issue that VR manufacturers warn users about is the potential for headsets to impact hand-eye coordination. When playing a VR game, the brain adapts to the constraints of the VR simulation and begins to expect it. Once the user gets out of the simulation, their brain must re-adapt. During this period of adjustment, users may reach past objects that they’re reaching for because the VR experience has altered their perception of objects at a distance. This disorienting phenomenon is typically short-lived, but there is a real concern that someone affected by it could cause serious damage by doing something that requires unimpaired balance and hand-eye coordination before they’ve fully recovered from any symptoms.

Of more lasting concern are fears of stereoscopic images harming children’s still-developing eyesight. Studies suggest VR headsets could trigger latent visual problems in people with intermittent exotropia — a condition quite common in young children where one eye sometimes turns outward. It’s thought that VR headsets and other stresses can trigger episodes of double vision in these children, which can then lead to permanent visual changes. While most VR headset manufacturers place warnings for children on their products, there’s no restriction on children using them.

It seems that the rule of moderation applies to the use of VR headsets and virtual reality gaming. Like many other indulgences, too much time spent engaging in VR can be detrimental to your eye health. However, if used properly and with the guidance of an optometrist, VR headsets could be the next step in enhancing your vision.

If you have any concerns with your eyesight or questions stemming from VR headsets, consider booking an eye exam at an FYidoctors near you.