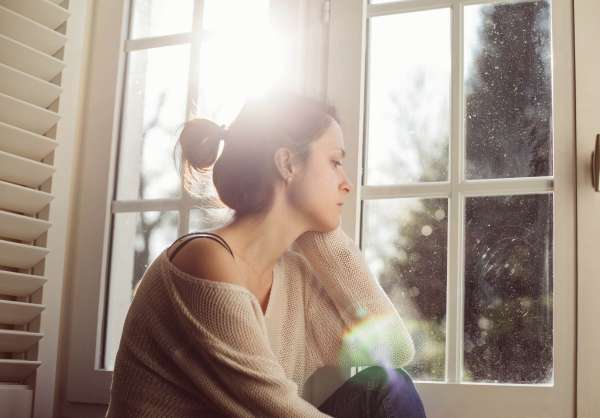 As we make our way through the second year of what has been a tumultuous time, it is more important than ever to discuss how mental health can affect our overall health, including our eyes.

For some, symptoms of depression and anxiety may be worse due to the mental strain of dealing with the pandemic, or for many, the pandemic may have induced these feelings for the first time. This could be due to added stress, isolation, lack of social activities and a number of other factors.

Depression can range from mild to severe, and typically causes feelings of sadness, a loss of interest or enjoyment of activities. It can lead to a variety of emotional and physical problems, decrease the ability to function both at work and at home or even cause trouble sleeping. And, as some studies have shown, could have a negative impact on our vision.

This Mental Health Awareness Week, we are exploring the link between ocular health and mental health; specifically depression and anxiety.

Studies have found that individuals with vision loss experience symptoms of depression and anxiety twice as often as those that are blind and five times as often as those with no vision loss. Similarly, depression and anxiety are also being linked to a deterioration in ocular health. Put simply, this means it can go both ways: vision loss can put a strain on mental health, but mental health issues can also put a strain on our eyes.

In a study linking depression and anxiety to vision loss in over 7,500 older men and women, Dr. Joshua R. Ehrlich recognized that vision loss should not always be an expected part of aging and that the bidirectional nature of the relationship between visual impairment and mental health should guide mental health professionals and eye care professionals alike. He says that poor vision is not an inevitable part of aging, and an estimated 80 per cent of vision loss is preventable or treatable. Accordingly, vision care is a vital component of promoting overall health, well-being and optimal aging.

In the first-ever national sample study titled “Association Between Depression and Functional Vision Loss,” researchers assessed depressive symptoms and their association with visual function and acuity by surveying 10,480 adults over the age of 20. As younger populations have not been studied as in-depth as older generations, this research aimed to correct that. The results of the tests found that vision loss and depression are linked to younger individuals as well.

Based on their findings, researchers concluded that eye care professionals, often the first point of contact, should consider each patient’s psychological condition and provide referrals when necessary, as early diagnosis can offer real benefits to overall health.

Everyone experiences anxiety at times, but a diagnosed anxiety disorder can be categorized into types. Anxiety disorder types include, but are not limited to, generalized anxiety disorder, panic disorder and phobia-related disorders. Interestingly, some studies suggest that social phobia and agoraphobia (the fear of being in situations where escape may be difficult) were the two most common anxiety disorders in older adults with vision loss.

Anxiety has been known to produce visual symptoms such as blurriness, tunnel vision, tingling and sensitivity to light, just to name a few. While researchers have found that there is a bidirectional association between depression and vision loss, there is no strong evidence to suggest anxiety has the same connection. Instead, they found that anxiety symptoms may precede vision impairment. It is also a possibility that patients assume symptoms are just linked to anxiety when they could be linked to changes in ocular health at the same time.

What can we take away from the link between vision health and mental health?

There are still many unanswered questions about the connection between vision health and mental health. For example, people with vision loss may have a hard time adapting to changes in daily life, causing depression or anxiety. Alternatively, it is possible that individuals with anxiety or depression may be less likely to seek eye care treatments or are socioeconomically limited from doing so. It is also possible that developing anxiety and depression can lead to vision loss for people chronically inclined to vision loss or ocular diseases.

Overall, it is evident that catching symptoms early, on either side of the issue, will improve both mental health and ocular health.

Click the link to access more Mental Health Week information and resources, or book an eye exam at your local FYidoctors clinic.